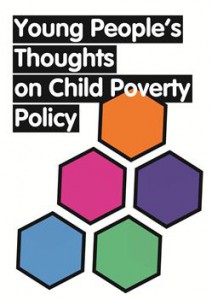 The Child Poverty Act committed the Government to ending child poverty by 2020, and producing an evolving child poverty strategy to signpost the way. While such an important strategy has potentially huge consequences for the 2.3 million children currently living in poverty, some children and young people were consulted with, but none participated in its production.

To partly address this, during 2012, five groups of young people from some of the most financially deprived neighbourhoods in England worked to develop their own, youth-led child poverty strategies. Over 150 young people from Tower Hamlets, Liverpool, Manchester, Westminster and Gateshead took part in projects to produce their own strategies, where they identified the problems and developed their own solutions.

During repeated focus groups, each group analysed what was good and what was bad about growing up in their area, and explored policy options to improve the experience of growing up there. They led the way in identifying and prioritising policy issues, as well as determining their ideal policy responses.What follows is the five child poverty strategies that were developed. While each strategy is distinct and different – responding to different local needs and reflecting the different life experiences and demographics of the participants – together they show that young people successfully can, and crucially want to, actively participate in the policy discussions around child poverty.

They also suggest that involving young people in policy production might lead to quite different approaches. Many issues that were repeatedly identified, such as the problems caused by expensive public transport, are not mentioned at all in the Government’s child poverty strategy. Others heavily cited by the Government, such as parenting programmes, did not even rate a mention among young people.

Solutions to the problems varied widely, from common sense suggestions like “making the bus free to get to school” to creative suggestions like converting fried chicken shops to family housing, to address both over-crowding and the over abundance of unhealthy fast food joints in neighbourhoods. Where there was some overlap in the problems identified by the Government and young people, most of the solutions identified by the young people were at odds with the official approach. For example, young people wanted benefits for low-income families improved and funding for youth activities protected. There were remarkably few places where both young people and the Government agreed on policy directions.

This research shows that young people have very distinct opinions about child poverty policy, rooted in their lived experiences, and can and want to, take part in designing policy responses. If we’re serious about improving the lives and future life chances of young people living in deprived neighbourhoods, we need to understand their perspectives and experiences so we can address what matters to them. A good way of doing this might be to work with young people in developing policy approaches to poverty. This research suggests that this might lead to quite a different approach.