Our local authority, the London Borough of Waltham Forest, takes the issue of child and family poverty as a very real issue because it affects many of our residents. We are the sixth most deprived borough in London and twenty third in the country. our Leader, Councillor Chris Robbins gave me the post of council lead on this in 2012. Since then I have been looking at the issues on the ground and what it means to families in our borough. We have some of the most deprived wards where there are forty six to fifty two percent of children living in poverty – much higher than the south east average of twenty one percent and London’s thirty six percent. 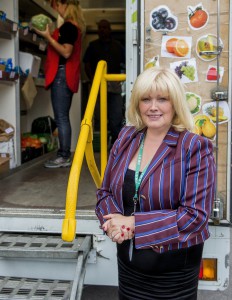 This deprivation is found in pockets within wards and is sometimes not immediately visible because our housing stock is very good. Where we have houses of multiply occupancy – usually in the private rented sector – then it is frequently the case that significant poverty may be found.

Among the things that Waltham Forest has done to tackle child and family poverty is to set up pilot projects in the four most deprived wards to see if we can make a difference to the residents there who live from day to day with the worry of not being able to get to the end of the week with enough food to feed their children. We hear the rhetoric in the press about the so-called feckless spending their benefits on Sky TV and cigarettes, however sixty percent of people accessing food banks are the working poor.

Often the working poor are taking on multiple low paid jobs in order to try to make ends meet and the cycle in which they find themselves really is a poverty trap. Such people can in no way be termed feckless – they work hard to keep their family together. Similarly, there are many genuine reasons why people must rely on benefits for the in the short term. They have done nothing wrong yet they face genuine hardship.

We are working with FareShare, a national food redistribution charity, and a local voluntary sector group to set up a north east London hub. The idea is that we can get the food efficiently distributed from this hub to the children’s centres in those four most deprived wards. On the back of this the children’s centres have set up baby banks where people can donate clothes so that parents can access baby clothes, prams, toys and bedding for free. The centres also offer help with advice on benefits and we will shortly be putting employment advisers into the centres thanks to Councillor MarkRusling who is the Lead Member for Regeneration and Employment.

Another thing that we have done is to bring in a community food project that visits the centres once a week with fresh fruit and vegetables straight from Spittlefields Market. They offer the goods at a much cheaper price than some of the shops nearby. Living in poverty means that when you want to do the weekly shop you can’t jump in the car and go to your big supermarket or maybe even get to your nearest market as transport fares can be an issue and you certainly can’t afford to get your weekly shop back home in a cab. This is another vicious circle. Local shops can be thirty percent more expensive than the big supermarkets. Families in poverty cannot generally afford to run a car so cannot get to and from the supermarkets to buy weekly groceries. This is compounded when people have two or more jobs because they don’t have the spare time to go to the supermarket every day or two (you can only carry so much shopping at once). As a result they end up paying premium prices for food.

We have also put in place the Dolly Parton Imagination Library which is a scheme where children aged from naught to five years will receive an age appropriate book delivered to them personally by Royal Mail once a month. The benefits are many fold; if you can read you have the keys to educate yourself, if the family have English as a second language this can help the parents as well and reading with the child creates an early bond between parent and child. Statistics from the US show that children that have gone through this system are much more school ready and their attainment levels when they get to school are higher. The cost of this scheme is just twenty five pound per year per child.

Perhaps most crucially, we are re-writing our child poverty strategy with the Child Poverty Action Group (CPAG); the idea being that the strategy would be something that was easily accessible to anyone reading it and that you wouldn’t have to be a statistician to understand it.

Waltham Forest’s Lead Member for Children and Young People, Councillor Clare Coghill, has just launched a scheme to provide free breakfast for all reception and year seven pupils. This is a very large financial commitment but we feel it is an important one not least in light of the fact that many children attend school hungry and this has a very negative effect on their forward progress.

We have lots of other ideas in the pipeline and we hope to tackle the issues head on but we must be realistic. We cannot afford to feed everyone in our borough that is hungry. The Authority had £64 million cut from our budget in 2010 and now with the announcement that all Local Authorities are facing further cuts we need to look at all avenues working closely with our voluntary sector, children’s centres, faith groups and GP practices. I feel that if we all work together we will be able to alleviate some of the issues but nowhere near all of the issues that contribute to poverty. Unfortunately, this is set to be an ongoing issue for some time to come and the prevalence of zero hours contracts for low paid workers is not going to help. If you don’t know what you are going to be paid from one week to the next then you cannot plan your budget and the very people that are being given these contracts are the ones with the least money and they will not have a substantial amount of savings on which to fall back.

Our work will go on and hopefully we will make a real difference on the ground where it matters to our residents.