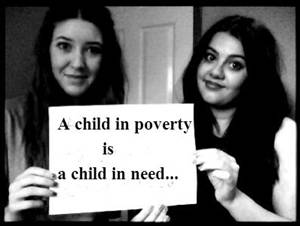 A Child in Poverty is a Child in Need

Did you know that in the UK today, there are roughly around 3.6 million children living in poverty? That’s almost a third of all children. Or did you know that the top 100 richest people in the world can end extreme poverty 4 times over? This is an utterly astonishing statistic. No one should have to go through this alone. That is why we decided to do something, to help raise awareness about just how serious this problem is. Our names are Megan Naylor and Megan Lyles and we are both 17 year old students currently attending Melton Vale Post 16 Centre. What we aim to do is raise as much money and awareness as we can, as after all, even if we only help one child, that is one less child living in poverty.

To start off with, our idea was unrealistic, until we actually thought about how we could use this to our advantage and help change a child’s life. We came up with this idea a couple of weeks ago when we were eating our lunch together, thinking if our lives were different what would we be eating instead. We presented the idea to Megan. N’s parents in the hopes of a little encouragement, however they didn’t take it very seriously. From this notion, we decided to do a little bit more research into poverty, especially child poverty. We found a lot of interesting facts and figures, in which we realised that child poverty is worse than people may suspect, for example, today in the UK alone around 1.6 million children are living in severe poverty. After we had gathered enough information, we decided to write a TwitLonger explaining, in detail, our plan of action in which we linked to BBC Children In Need’s official twitter page. Thinking nothing of it, we decided to carry on tweeting other UK charitable personals in the hopes that one of them would see it. To our surprise, the following day BBC Children In Need got back to us asking for more information about what we were planning to do. We then emailed back in depth our idea, and to our utter amazement, they asked us to become feature bloggers for their website, and potentially Facebook page. We agreed to allow them to use our photos and footage and they would be back in touch the week before, during and after to see how we’re getting along. This is when we realised that our idea was actually achievable. After this, we decided to get in contact with our local paper, The Melton Times and they offered to give us a spot in the weekly paper allowing us to notify the public of our idea.

Our idea is to live in a family member’s caravan for one week, with the budget of £25.00 which will be spent on basic necessities such as food, school equipment and any toiletries we may need to keep us going for the whole week. In terms of electricity, we will restrict ourselves to only half an hour of television a day and will not be using any electrical items, for example, iPhones, Laptops, and hair appliances etc, because these are the things we take for granted every day. (with the exception of school/library computers and a camera so we can document our journey and experience along the way.) If we need to do school work, we shall have to stay after school to use any equipment/resources so we are not behind with our work. Our water usage will also be restricted as we are only allowing ourselves one shower for the week; if we need to wash our hair we have decided we will have to use the sink and boil the kettle to minimise our water usage. We have decided that we shall not have any heating on and that we are only allowed 2 outfits for the week, washing the clothes in the sink if needs be. In terms of travelling we are not going to be using any type of transport, but instead we are going to rely on walking to and from places. We are planning on doing this charitable event on the week commencing 28th October to the 3rd November as we decided that this was the best time to do it. During that weekend we have an 18th birthday party, but as we are doing our fundraising event we have decided that it was inappropriate for us to go, because it would give the wrong impression, which we don’t want to do.

From doing this, we hope to show everyone that this isn’t a small issue and that it is not going away any time soon and with their support, we can help put a stop to this. Helping a child in poverty is not something that can be done overnight and the more money we raise, the better the chances are of helping a child. We want to show people what it’s like living without things we take for granted, things we use every day and maybe we could encourage others to do something to help. If you would like to get involved, we have set up a Just Giving page where you can donate as little or as much as you like, as after all, “every little helps”. We have also set up a Facebook (Help a Child in Poverty) and Twitter (@HelpAChild) account so that members of the public can be kept up to date with our progress.

Thank you for all your help and support, we are honoured that you gave us this opportunity to make a change and we can’t thank you enough. Also thank you for any donations given, we are grateful for anything we receive. With your help, we can make a difference. Thank you.