The Living Wage: good for business, good for families, and good for society

Posted on 13 Sep 2013 under Previous Publications, Working with Business 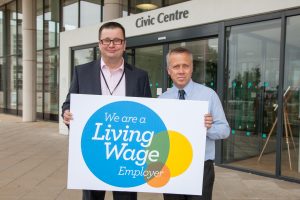 An initiative of Citizens UK, the Living Wage Foundation grew from the belief that hardworking people should be able to afford to access community and family life. We believe that work should be the surest way out of poverty.

The Living Wage enjoys cross party support, with public backing from the Prime Minister and the Leader of the Opposition.

The Living Wage – currently set at £7.45 for the UK and £8.55 for London – is calculated according to the basic cost of living in the UK. It is enough to ensure that working people and their families can afford a decent standard of living.

By conservative estimates, the campaign has put £200 million into the pockets of 45,000 low paid workers every year.

We aim to promote the Living Wage as not only the right thing to do, but a decision that makes business sense for employers. We operate a Quality Mark system, the Living Wage Employer Mark, a fair trade mark for fair pay.

Employers choose to pay the Living Wage on a voluntary basis, setting themselves apart as businesses with a commitment to work that pays fairly.

The accreditation is a signed licence between the Living Wage Foundation and the employer.

Living Wage Employers pay the Living Wage to all direct and contracted staff, such as cleaners and caterers.

There are now almost 400 accredited employers, spanning the UK and representing a host of different industries. We are proud of each and every Living Wage Employer, from local colleges and shops through to Barclays, KPMG, The National Portrait Gallery and Great Ormond Street Hospital. A full list of accredited organisations is available here.

Living Wage Week this year will be held on 3rd-9th November.

During the week the new hourly rate of the Living Wage will be announced by senior political figures, and employers across the county will come together to celebrate their commitment to fair pay.

Living Wage Week 2012 saw blanket coverage across all media channels, political endorsement and a surge in organisations becoming accredited. Then we had a mere 70 accredited organisations, and now we have almost 400.

This has been one of the most successful social change campaigns in recent years – with a step change in levels of public awareness and corporate engagement. In the same way that the Fairtrade movement evolved from small beginnings, the ‘Living Wage’ is now on the cusp of moving from the niche to the mainstream. This is why a number of major employers across all three sectors have deepened their commitment, in order to support the movement achieving mainstream status.

Employers also report positive effects on recruitment and retention, on staff wellbeing, and on consumer awareness of the CSR commitments of their business.

Those receiving the Living Wage are able to access a decent quality of life. For some this might mean healthier meals, access to evening study, or the security that a rainy day won’t cause a flood.

For others it allows them to work just one job, or to take the tube rather than the bus, giving them the gift of time to see their families.

Employees that can afford to access a dignified standard of living are better able to contribute to their communities beyond work. Citizens earning the Living Wage and above are more likely to spend, to save, and to have greater faith in the economy. There is evidence that those affected by low pay are more likely to spend money locally.

Whilst the full potential is yet to be explored, the cost of low pay to the state is estimated at £2.2 billion a year of in-work benefits and foregone tax revenues. Over the next decade, the cost is projected to reach £20 billion.

The Living Wage Foundation is on twitter @LivingWageUK. Please use #LivingWageWeek to join in the conversation on 3rd-9th November 2013.