Posted on 10 Nov 2014 under Previous Publications, Working with Business

Living Week 2014 2nd-8th November was the biggest and liveliest to date with events up and down the country, drawing sharp focus to the issue of low pay and in-work poverty. The Living Wage Foundation announced over 1000 Living Wage accredited employers, a huge milestone for the campaign. 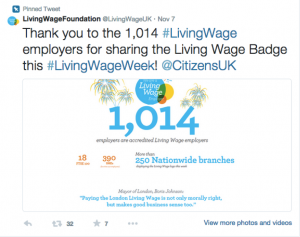 There were many brilliant events, debates and announcements during the week but the APPG on Poverty has put together five of our key highlights:

Mayor of London Boris Johnson launched the new London Living Wage rate of £9.15 per hour by helping out at Kaffeine cafe – a small independent business paying its staff the Living Wage. 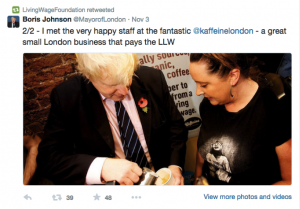 The new London Living Wage rate was projected in Piccadilly Circus in London for all to see. 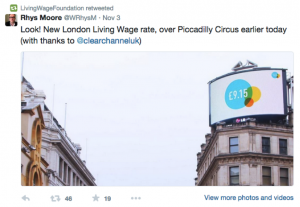 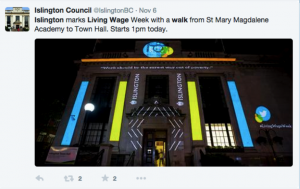 You can watch the Islington light show here.

The new Living Wage rate of £7.85 was launched at Salford University, the first time it’s ever been done in the North West. 75 people attended to celebrate:

The event heard from a great range of speakers – Kate Green MP, Chair of the APPG Poverty who chaired the event, employers from every sector, and Dave Morton whose testimony is written up here. A thinkpiece by Centre for Local Economic Strategies (CLES) “Living Wage and the Role of Local Government” was launched at the event. The full piece can be read here.

The award for top Living Wage organisation went to Salford City Council, not only as an employer but for seeking to make Salford a Living Wage City. The award was followed by a range of workshops that informed people and invited them to help set the agenda for the next year of campaigning for the Living Wage in Greater Manchester 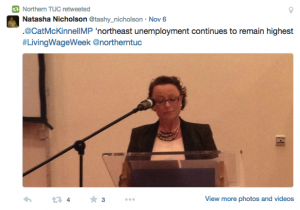 Poverty Ends Now (PEN), are a group of young people from the North East, London, Manchester and Liverpool who have come together to work with the All Party Parliamentary Group on Poverty to produce their own Child Poverty Manifesto and national anti poverty campaign.

The Liverpool group wrote, directed and acted in their own play which portrayed life on low incomes as they see it. The play was followed by a community discussion about what needs to happen to end poverty in Liverpool, lead by:

An interview with some of the cast can be watched here.

Thanks to Chris White MP, Vice Chair of the All Party Parliamentary Group on Poverty and the Backbench Business Committee, the House of Commons held its first ever debate about the promotion of the Living Wage. 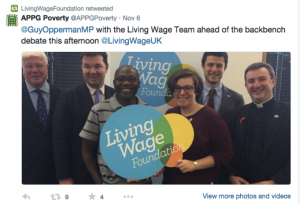 The debate included thoughtful and detailed cross-party contributions with examples of best practice cited from constituencies across the UK. 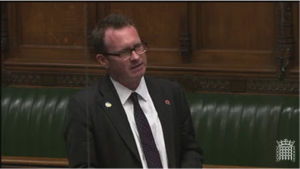 To watch the debate in full or to read the transcript click here. 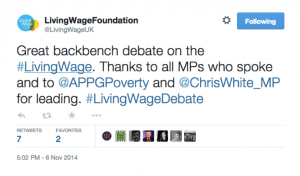 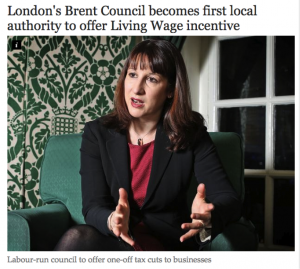 Businesses in Brent could be the first in the country to be offered business rates discounts as an incentive to pay the Living Wage.

Some of the lowest-paid workers in the borough could get pay rises of around £2.50 an hour as a result of our offering firms in the borough up to £5,000 off their business rates – if they become living wage accredited employers.

It is estimated that around 30% of Brent residents are currently earning less than the living wage which is an informal benchmark based on the amount a person needs to earn to cover the basic costs of living. This week the new rate was announced as £9.15 an hour in London and £7.85 an hour in the rest of the UK. The national minimum wage, which is set by the chancellor, is significantly lower at £6.50 an hour for adults, and £5.13 for those aged 18 to 21.

Councillor Roxanne Mashari, Cabinet Member for Employment and Skills at Brent Council, said: “We are committed to championing the living wage and tackling the root causes of poverty in our borough. We know that paying the living wage makes good business sense as it incentivises staff and helps to recruit and retain the best people, whilst reducing absenteeism. This package of proposals announced today aims to create a further incentive for businesses in Brent to take the step towards paying their staff the living wage.

“Many hard-working people on low wages struggle to make ends meet and it is up to councils like ours to do everything we can to ensure that a fair day’s work leads to a fair day’s pay.” 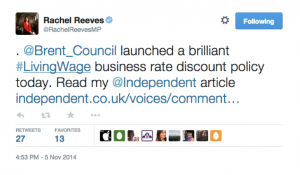