In spring 2014 the Webb Memorial Trust launched the Paul Goggins Memorial Prize. Paul Goggins MP was the Secretary of the APPG Poverty and a champion of the anti-poverty agenda in Parliament and outside.

“For Paul, the anti-poverty debate was not a discussion to be had solely by politicians and academics, separate from the everyday lives of people struggling to cope with the reality of poverty. Paul believed that the voices of people living in poverty should be heard at the highest level and that direct local action amongst citizens to address poverty should be encouraged and embraced.”

The Webb Memorial Trust and APPG on Poverty sought nominations for the best civil society initiatives that could demonstrate poverty reduction in a tangible way. Local community organisations submitted a range of innovative and engaging projects to their local MPs who then made the nominations to the Trust and APPG.

In November 2014 the one-off prize of £3000 was awarded to The Whitefoot and Downham Community Food + Project in Bromley, south east London.

Have a look at the video submitted by the winning initiative and nominated by Lewisham East MP, Heidi Alexander. 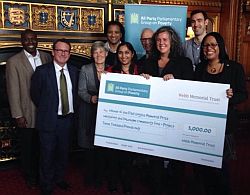 In the summer of 2013, Whitefoot Ward Local Councillor Janet Daby brought together a group of local church and community leaders to share her vision of alleviating food poverty and building local community. The Project’s primary focus was to reduce hunger, particularly for those adversely affected by changes to benefits following the Welfare Reform Act. By working closely with a network of volunteers and local partner organisations, such as housing associations and debt advice centres, the Project offers a holistic approach to tackling deprivation.

“I like to think that the Whitefoot and Downham Community Food + Project story is of a community building relationships and being mutually supportive. We need each other, to offer support and to help one another. Building strong communities is needed, whether it is to listen, to socialise, to give advice, support with decision making, finding employment, support with child care and so on. We also need to reduce the isolation and fear that many people really do experience.  As people we are stronger when we do things together, which I feel is why wdcfplus project has been so successful.”