Fairness Commissions: Can they Help Reduce Poverty and Inequality?

On November 19th MPs and members of the House of Lords came together in Parliament with representatives from Fairness Commissions, Trusts and Foundations from across the UK to discuss the challenges faced in addressing poverty and inequality at a local level.  Attending the meeting were fairness commissioners from Birmingham, Blackpool, Bristol, Camden, Islington, Liverpool, Manchester, Newcastle, Newport, Oldham, Plymouth, Reading, Sheffield, Southampton and Tower Hamlets. They were joined by representatives from a number of other agencies including the Living Wage Foundation, the Equality Trust, the New Economics Foundation and the Joseph Rowntree Foundation. 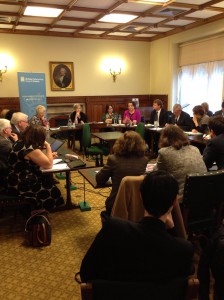 The meeting was organised by the Webb Memorial Trust and the APPG on Poverty chaired by Kate Green MP. The Webb Memorial Trust was set up in 1944 in honour of the life and work of the sociologist, economist and social reformer Beatrice Webb.  In recent years the Trust has worked closely with the APPG on Poverty drawing on a range of outside people and knowledge in helping the APPG to achieve its goal of increasing understanding of poverty among parliamentarians and to seek all party solutions. As part of its Poverty and Inequality Programme the Trust has commissioned Professor John Diamond and Paul Bunyan from the Institute of Public Policy and Professional Practice at Edge Hill University to carry out a study into Fairness Commissions and civil society initiatives which help to reduce poverty and inequality.

Key themes emerging from the meeting included the role of elected representatives in driving Fairness Commissions, asking how Commissions can work with partners in education and health sectors, the link to wider civil society and the level at which Fairness Commissions should focus their work – on very targeted local outcomes to wider lobbying for national policy changes.

An interim report on the study into Fairness Commissions looking at the processes involved, their findings and recommendations, barriers to and progress made in addressing poverty and inequality in specific localities and regions across the UK will be published in January, bringing together information and analysis from interviews, a survey of commissioners and the meeting in Parliament. The next stage of the study will look at civil society more broadly and investigate ways in which civil society initiatives help to reduce poverty and inequality. This will be carried out over the coming months with a final report bringing together the findings of the study overall being published in April at an event in Parliament.