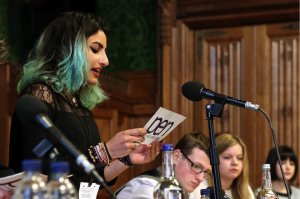 The All Party Parliamentary Group on Poverty has been working with Children North East and Rys Farthing from Oxford University to produce a Children’s Manifesto and action plan on poverty.

Young people from the North East, London, Manchester and Liverpool who were already actively involved in tackling child poverty came together to form a national group which they named PEN – Poverty Ends Now.

The group met over several residentials to produce a six point Children’s Manifesto on Poverty that was launched in Parliament at the end of 2014.

View the Children’s Manifesto on Poverty

The six points of the PEN manifesto are:

PEN are also working on taking action at a local level within their own cities: